From its inception the school has benefited from generous parent support. Not content with mere fund raising, Epping parents have given their time in numerous working bees which, besides shaping the grounds, built up a positive spirit of teacher/parent co-operation.

The Parents and Citizens' Association and the School Auxiliary formed in 1957 were blessed with leaders of initiative and vision who established a fine tradition of cooperation with the school executive. It was parental pressure, together with the diplomatic skills of the first headmaster, Mr McGregor, which convinced the Education Department to buy the land which now provides access from Vimiera Road.  The Parents and Citizens' Association's contribution of 3,000 pounds led to the acquisition of an old orchard to the east of the school which now makes up the school playing fields.  These areas, together with the original eleven acres were transformed as parents gave their time and skills to extract tons of earth and rock, and plant the areas with trees, grass and shrubs.

The fund raising activities of both the P&C and School Auxiliary have been of crucial importance in furnishing the school with audio-visual material and an innumerable range of teaching aids not provided by the Department. The first fete was held in 1957 and by 1972 the Epping Fete was renowned throughout the district.  By 1972 over $100,000 had been raised through the fetes. The move to an Arts/Craft Exhibition produced a handsome profit for the school.

The Epping community supported the Silver Jubilee activities in 1982. Parents joined with staff and students to form an active committee which sponsored wide-ranging activities, including a commemorative church service, an historical calendar and dinner dance. When it presented a tribute to Mr Jack Pearson, the committee acknowledged the untiring work and dedication of a man who had been involved in the Grounds Committee of the P&C since 1958.

It is often said that schools attract most support when their values and aspirations reflect those of the community. The unstinted support which Epping Boys High School parents had provided during the first twenty-five years of the school's existence confirmed confidence in the direction of the school and boded well for the future. 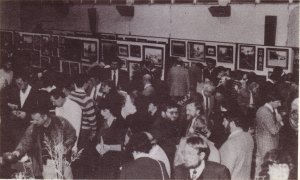